This week was homecoming at my school, with everything culminating on Friday.  It wasn’t a miraculous a day, it was actually pretty normal.  But as I was driving home; after chaperoning the homecoming dance, I was thinking about all of the people helping to make it a special day for kids; young and old.  The world we live in is so complicated and not always in a positive way.  It truly takes a village surrounding kids to raise, support and show them how to be good, happy people.

The day started with teachers at my high school wearing the jerseys of football players.  Not something unique to my school, but still an honor to get one from a student.  While the jerseys don’t fit this 37-year-old teachers who has had three kids, I and many others wear them proudly for support.  The kids laughed at the shoulder pads sticking up and probably the tightness around the middle of mine.  But even as we were a little uncomfortable, we showed our students we were willing to do so for them. 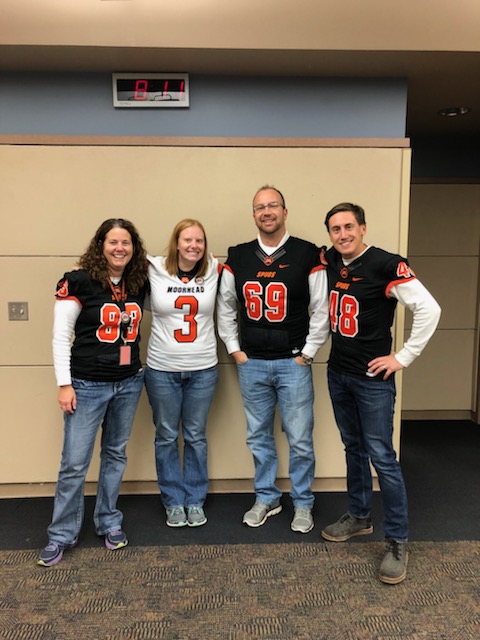 As the day kept on, we continued our preparations for the Homecoming parade.  We made signs, organized rides, got candy; not even knowing if people would show up to the parade.  The weather was cold, rainy, and down right miserable.  But as it turned out, the parade route was full of people supporting the clubs, athletics, and students of my school.  My AVID students were part of the parade.  This was the first year we have thought about putting them in the parade and truthfully it was very last-minute.  We had all four grades represented on our float.  There were even a couple of students who graduated from our program last year, going to college in the area who joined us.  The kids sang, walked, handed out candy and had a blast.  They actually had more fun than I thought they would; and I think they had more fun than they thought they would too.  But my AVID kids aren’t always in stuff.  Many of them are in no other clubs besides our AVID program.  So without AVID they would never get to be in a parade.  To see them so excited and having fun was amazing.

My own children came to the parade.  My science department always does a float and the girls love coming to see it.  They got so excited to see me walking in the parade, even though I didn’t give them a ton of candy.  There bags were already plenty full!!!  But they would not have been able to see me if their grandma didn’t pick them up from school to get them to the parade.  After the parade, I met them quickly in my school parking lot.  When I turned the corner, I saw them start jumping up and down.  It touched my heart a little bit, because they were simply excited to see me.  We run constantly and have such busy lives, I sometimes simply don’t think about how much I love them and how happy they make me.  My children have a pretty huge village around them and I try to remind them how lucky they are to have so many people who care about them.  Not all kids have that in their lives.

I left them and went to my very good friend and colleague’s house to eat, listen to the football game, and rest before we chaperoned the dance.  I stayed up until midnight last night people, actually it was closer to 1 before I got home, that is something I almost never do……..ask Jason, he will tell you.  We listened on the radio and cheered when there were good moments and were disappointed by the bad.  Thinking about the faces belonging to the names’ of kids as we heard them.  But the announcer kept saying the stands were full of people cheering on our team.  People supporting kids, a village surrounding them.

At the dance, there were administrators, teachers, and parents making sure the kids were having a good time.  Parents making trips to get more water for the kids, teachers making sure kids were safe, and administrators making sure they followed the rules.  But they were all adults giving up their Friday night to be with our kids, interacting with many different groups of students.  All with smiles on our faces, laughing and joking along with the kids.  Showing them our dance moves and laughing right along with them because they are pretty old school.  It was a great night.

Had all of those people not showed up yesterday, what kind of message would that have sent to our young people.  Some of your kids are born to you and your family, some are adopted and some belong to you with no biological ties at all.  But in this day and age of the world, they are all our kids.  And I don’t think this idea applies only to people working in schools or working with young people.  As a society, these are our kids and we need to be role models to help them navigate the world.  To sift through some of the bad and be taught and shown some good.  I know teenagers and kids can be a handful.  Dear God do I know it from teaching, church youth group, having my own children!!  Children are A LOT……period!!!  But they need, more than anything else, positive, supportive people to take an interest and be there.  It truly takes a village to raise a child.  I saw the village surround my students, school and community on Friday and it was pretty awesome………

Challenge Time!!  My challenge today is to simply ponder all of the kids around you.  Young, old, related or not related, how do you or how can you support those kids?  I know you are busy, but kids don’t need a lot of time.  They need you to make an appearance.  They need you to show up.  If you have an idea or challenge for our group, let’s hear it!!  Or let’s talk about all of the positive people around you when you were growing up.  Leave your comments here or on our Facebook page, Speaking Jelinese.  Let’s make a huge village surrounding our kids.

Talk to you soon,

3 thoughts on “It truly takes a village to raise a child…….”